Survival analysis, censoring and hacking the log_prob in TensorFlow Probability

Survival analysis is a super useful technique for modelling time-to-event data; implementing a simple survival analysis using TFP requires hacking around the sampler log probability function; in this post we’ll see how to do this, and introduce the basic terminology of survival analysis.

Survival analysis is an incredibly useful technique for modeling time-to-something data. “something” can be the death a patient (hence the name), the failure of some part in a machine, the churn of a customer, the fall of a regime, and tons of other problems. Since time-to-event questions are everywhere, you’ll see survival analysis (possibly under different names) in clinical studies, econometrics, epidemiology, mechnical engineering, etc.

For me, one of the biggest sell-points of survival analysis is that it provides an elegant solution to handle censored observations. This is a technical term, and it can be quite confusing1, so I’ll try to illustrate it with a toy example. Say you’re selling diapers, and you bought 100 diapers to begin with - that’s your stock. After one month, you’ve sold 32 diapers, and still have 68 diapers in stock. To plan the size of the warehouse you want to build, you want to estimate how long it takes you to sell a diaper. Obviously, taking the mean of selling-times of the 32 diapers you’ve sold would give you an overly optimistic estimation… but what do you do with the 68 diapers you still have in stock? How can you use the information that they’ve been sitting here for some time already to improve your estimation? You call them “censored diapers”2 and use survival analysis.

Survival analysis is a huge topic and I’m obviously not going to cover everything in here. I’ll focus on the terminology needed for this post; for a more detailed introduction, I highly recommend checking out lifelines docs (we’ll use lifelines - a python package for survival analysis - in this post, as well).

As mentioned above, survival analysis is about estimating a time-to-event. Let’s denote this time with $T$. Ideally, we’re interested in learning a probability distribution $P$ over the possible values of $T$. Note that this already assumes $T$ happens sometimes in the future, since the distribution integrates to 1. This is a reasonable assumption when we study mortality, but not as much when studying something like conversion rates - see this post for more details if you’re interested. In this post I’ll stick to the more traditional (and morbid) survival analysis in which everyone dies eventually.

… since the only thing we know about the censored events is that the time-of-event is greater than the time of censoring. Now add a prior on $\theta$ and you’ve got yourself a posterior (up to normalization which we usually don’t really care about).

Let’s cook up an example to see how this works.

Say we start stocking up on diapers on January 1st. Some arrive to us exactly on time, some arrive later - arrival times are uniformly distributed within January. For simplicity, we assume that the real underlying event times (from arrival to selling) are exponentially distributed with a mean of 50 days. This is what we would actually measure without censoring, that is - if we could’ve waited long enough until all (or enough of) the diapers were sold.

Let’s assume censoring happens on March 1st - that’s the day in which we decide “OK, these diapers were sold after these real-selling-times, these diapers are still in stock, let’s estimate mean time-to-event”. Phrased differently - this is when we get the data. By definition, every diaper whose Real Selling Date is later than March 1st will be considered a censored observation. The times of the observed, uncensored event are from arrival to selling; The times for the censored events are from arrival to the censoring date.

Here we can already see the problem - censoring makes us severely underestimate the mean selling time:

Pictorially, this is how it looks like. We sample 20 rows of data, and plot their individual timelines. Censoring events are the red circles, and the censored part of each observation is the dashed blue line:

Obviously, the mean length of the black lines is significantly shorter than that of all the lines; this is exactly the bias caused by ignoring the censored observations.

In this parametrization, $\lambda$ is the mean time-to-event; we want to infer $\lambda$ from the data. We put a $\text{Normal}\left(\mu=3,\sigma=3\right)$ prior on $\log\lambda$, representing our prior belief that diapers aren’t sold in nanoseconds nor in geological timescales, and the constraint that $\lambda$ must be positive.

So, this means that our log probability function is:

The first sum and the last term are easy - we just define an exponential model with the prior we want and feed it with the observed samples. The tricky part is how to handle with the second, censored sum.

The thing we need to implement in order to feed the right log_prob function to the sampler is called LCCDF: an intimidating acronym the stands for Log Complementary Cumulative Density Function. We’ll unfold this backwards:

Some LCCDFs are implemented in languages such as Stan (this is what we want), but in TFP (currently) we have to implement this ourselves. Luckily, the CDF of the exponential distribution is $1-e^{-\frac{T}{\lambda}}$, which means our LCCDF is super simple - $\log P_\lambda(T>t)=-\frac{T}{\lambda}$. Cases for which we don’t have an analytical expression for the LCCDF are trickier to handle; The solution in Sigrid Keydana’s post (using TFP built-in CDF functions) is more general, but I found it less numerically stable, and writing everything explicitly helped me understand what’s going on. We’ll stick with the simpler case in this introductory post.

We now go ahead and implement this:

This is our model, containing the normal prior on $\log\lambda$ and the exponential likelihood terms. This is pretty straightforward:

Now, given a $\log\lambda$, the exponential LCCDF function simply sums $-\frac{T}{\lambda}$ over all censored times. Note that log_rate has shape (n_chains,), and cens_times has shape (n_cens_times,), so we need to add a tf.newaxis to make sure both are broadcasted along the right dimensions. We also cast cens_times to float so the division is properly defined.

We now proceed as usual, by calling our HMC sampler helper function:

Just for comparison, if we call the sampler without the censored likelihood (meaning we “throw away” the censored observations), this is what we get:

This was a very simple and cooked-up demonstration of survival analysis, mainly to illustrate how to account for censored observations by adding the necessary LCCDF to the sampler log probability function. However, in many cases what we actually want is to understand how different features affect survival probability. For example, we’d like to understand how a given treatment affects the survival probabilities of patients, or the age of customers affects time-to-lapse or whatnot. This is called survival regression.

Like in the previous posts, I’m sticking to the excellent examples from McElreath’s Statistical Rethinking book. However, this example is actually not from the book itself, but from Statistical Rethinking Winter 2019 Lecture 13 from 23:43 onwards (you should probably go watch this now, the relevant part is about 10 minutes long).

The data in this example is from an animal care facility in Austin (source), and describes cats arrival time to the facility, when/if/how they left, breed, color, age, etc. For us, the event of interest is adoption - we’ll try to estimate time-to-adoption. But this time, we’re using the cats color as a predictor: we’ll compare the adoption times of black cats vs. non-black cats.

We’re using the same data as McElreath (who kindly supplied both the data and the .R script containing the processing):

The model is very similar to our made-up example from before - the only thing that’s different is that now $\log\lambda$ is a simple linear function:

$\text{is_black}$ equals one for black cats, and zero otherwise, which means the log rate equals $\alpha+\beta$ for black cats and $\alpha$ otherwise. So, instead of estimating $\log\lambda$ directly, we’re estimating the parameters of this simple linear model. The prior for the intercept is the same as in the previous example, and the prior for the slope is centered around zero (we don’t have a-priori reason to believe black cats are bigoted against), and of the same scale.

The LCCDF function is again very similar, but this time in the denominator we have our simple linear function and not just a single parameter:

log_prob is exactly the same, and so is the code for calling the sampler:

We convert samples back to numpy for easier plotting, and compute the corresponding rates:

$S(t)$ quantifies the probability of surviving longer than $t$. For the minimal possible duration (0 in our case), $S(0)=1$, and $S(\infty)=0$ (everyone dies). We can use the inferred rates to plot the estimated survival curves:

… which is the same plot as in the lecture.

In all we’ve done so far, we’ve assumed a specific parametric form for the durations distributions… but how can we check if this assumption makes any sense? One way is to compare it to a non-parametric estimator of the survival function.

The Kaplan-Meier estimator is a non-parametric estimator that does just that. It is defined as follows:

This formula has a pretty intuitive explanation - surviving up to time $t$ means surviving all the events before $t$; For each such event, in which $d_i$ out of $n_i$ subjects died, the estimated survival probability is $1-\frac{d_i}{n_i}$, so surviving all of them is the product of all these numbers.

Instead of implementing KM estimator ourselves, we’ll use the wonderful lifelines library, which is the most comprehensive python package for survival analysis I know of (R has a much better survival analysis ecosystem). Implementation is easy, but if you’re interested in survival analysis, you should check out lifelines; it has a wonderful API, great docs and a wide range of models, helper functions, plotting and summary statistics.

We’ll fit two KM estimators - one for black cats and one for non-black cats, so we can compare the non-parametric to our parametric survival functions:

What are we seeing here?

So, how good is our assumed parametric form? That, of course, depends on how much you care about capturing all the small details; It seems to capture the overall trend, but, for example, it doesn’t quite capture the “sigmoidal”-like behavior around days 0-10, and it overestimates the survival probability between days 60-100 for both groups. This is somewhat expected - we’d be surprised if a single-parameter model would be able to capture all the details we see in the non-parametric curve.

This post was pretty introductory - its main goal was to explain what censorship is (I think this is a super important concept to understand if you’re doing any kind of data analysis), and to implement a likelihood function that can handle censored observations. In the next post we’ll dive a little deeper into survival regression, still from a bayesian modeling persepctive. 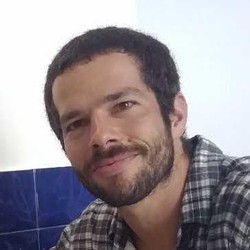